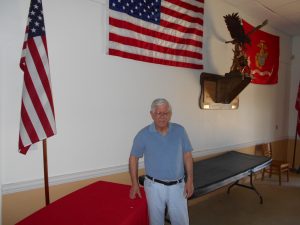 The Detachment Commandant is the most important office in the Marine Corps League. This leadership position accounts for the membership levels, programs, and the manner in which the League is viewed by Marines, members and prospective members, and the citizens of the community. With effective leadership in this office, the Detachment and the entire League will be successful based on the results of the Detachment. Success and achievement begets recognition, and a growing membership.

LEADERSHIP  – The first and most important job of the Commandant is to lead.       In doing so, he/she sets an example for other officers, and the Detachment members. Leading also requires that tasks and accountabilities (along with authority) be delegated to subordinate officers and members.       However, the ultimate responsibility for accountabilities still rests with the Commandant.  In leading, it is important to continually assess results, and assist/support subordinates in removing obstacles to their completing their delegated tasks.

PRESIDE AT MEETINGS – The Commandant should be reasonably well versed in Roberts Rules of Order and the Ritual of the Marine Corps League in conduct of meetings.       Meetings should be concise, orderly, and allow relevant information to be presented that represents different points of view. The Commandant controls the meetings with the assistance of the Sergeant-at-Arms.       The manner in which a meeting is run will have a significant impact on attendance, participation, and promoting the Detachment.

The Commandant is also called on to chair officer and/or committee meetings, in addition to general membership meetings. The meeting results are directly proportional to the focus of topics, control, timeliness, and decisions relative to views presented.

An agenda is helpful for meetings, which should be developed and/or approved by the Commandant. During the business portion of the meeting, it is important to focus on business, though a little humor can keep matters in perspective. Socializing is best done before and after.

CHIEF EXECUTIVE OFFICER OF THE DETACHMENT  – As an incorporated entity within the state, the Commandant is CEO of the Board of Trustees and the Detachment. As such, he/she is responsible, as a corporate officer, for the activities, financial standing, and image portrayed in the community and the League.

POSITIVE PUBLIC RELATIONS  –  The Commandant is looked to by the League, the members and Board of Trustees, and the community as the primary contact and promoter of Detachment events and community/Marine Corps activities.       Public relations includes direct meetings, media contact, and appearance at appropriate civic and military events. The leader of an organization, by virtue of his/her position, will be the primary provider of information, the primary representative of the Detachment at functions, and the primary salesman for the League and Detachment.

FORMULATION AND DEVELOPMENT OF PROGRAMS  – Just as a newly elected President has ideas and programs that he/she promotes to get elected, so too should the Commandant have ideas and programs that will improve Detachment operations, and enhance the capabilities/results of achieving goals. Also, just as a President needs to sell the ideas to Congress, and compromise where appropriate to achieve the best program for all constituents, so too the Commandant must articulate, sell, and compromise where appropriate, promote programs and objectives with Detachment members and the Board of Trustees.

The most important element of achieving this task is developing a written plan/strategy for each program and idea, discussing the merits and weaknesses, and agreeing on a direction.  Other officers and members will also have ideas and programs, but it is the ultimate responsibility of the Commandant to lead the way in development and initiation.

APPOINTMENT OF COMMITTEES TO CARRY OUT DETACHMENT BUSINESS  – There are few reasons to appoint a committee: To bring together varied skills and perspectives to study/solve a problem or evaluate an idea; to plan, initiate, and accomplish a given task or program; to involve members in an legitimate activity who might otherwise not volunteer.

Some items to consider in setting up a committee (which will be discussed in a later section) are: Determine if the purpose clearly needs a committee, or can the situation be handled by making one individual accountable; make sure a committee is not formed to delay action on solving a problem; clearly define the results expected of the committee, and establish a start and end date, at which time the committee will be dissolved; select a committee chairman who has strong leadership and meeting skills to reduce the time and effort to achieve results.

There are adages about committees – A committee is comprised of the unwilling, formed by the unfit, to do the unnecessary; and, a camel is the result of a committee trying to design a horse — so it behooves the Commandant to assure the necessity, bring together the qualified skills, and describe time targeted expected results. Because committees are formed and authorized by the Commandant, he/she is ultimately responsible for the result.

It takes money to operate a Detachment, and more money to support programs, events, and activities.  Of importance to Detachment operations is communications with members, prospective members and the community – normally done by means of a newsletter (postage and printing costs). To support Detachment activities, Color Guards, and charitable causes, the Detachment will have to look to outside donations and fund raisers.       The solicitation of donations is an important job of the Commandant – he/she is the “point man” for contacting personal and corporate donors. (Additional coverage will be given in a later section).

The integrity, image, membership level, and ability to support events are often directly proportional to the size of the treasury, and the way in which it is managed. Every Commandant needs to understand sources of revenues, expense control, cash flow, profit and loss, and balance sheet data – and be assured that financial procedures provide an audit trail to support inquiries.

The Commandant should be one of two signers on Detachment checking and monetary accounts (the other being the Paymaster).       The Commandant and Paymaster are bonded by MCL National.

ABIDES BY THE BY-LAWS AND POLICIES OF THE MARINE CORPS LEAGUE  –  The Commandant must set the example for the other officers and members of the Detachment.       Having sworn to uphold the principles and laws of the League, the Commandant, as should every officer, must be familiar with the By-Laws and Policies prescribed by MCL National, the Department, and the Detachment.       All policies and by­laws must be compatible, and cannot be in violation of National by-laws and policies.

The By-Laws and Policies of the League, Department, and Detachment are the guiding principles under which the various organizations operate.       Laws and rules are established as a framework for operations, and entitlement under the law. The Commandant is ultimately held accountable for adherence to by-laws and policies, and therefore must assure that the Detachment and its members are in compliance.

The Commandant may want to have assistance from the Board of Trustees, or an Awards Committee, but may act on his/her own to show appreciation for support and achievement. For instance, contributors to Toys for Tots or other Detachment programs can be thanked, and encouraged to participate again.  Service by members who have done more than expected can be rewarded. In addition, the press/media can be informed to provide additional visibility to the Detachment and its programs.

SUPPORT OF NEW DETACHMENTS A ND OTHER DETACHMENTS WITHIN THE DEPARTMENT  –  It is the duty and responsibility of the Commandant to promulgate the concept of the League.       While every Detachment is concerned and interested in developing its membership and programs, and wanting to take honors for being the best and most uniquely qualified Detachment in the League, there is a larger responsibility to all Marines and all Leaguers.

Every Commandant needs to be aware of areas where Marines live, where meeting locations are not conducive to participation by these Marines, and/or where there are enough Marines to generate interest in the Marine Corps League organization. The Commandant and Detachment members have an obligation to fellow Marines to assist in developing a Detachment to benefit these Marines.       Information in a later section describes the steps for starting a new Detachment – but every new Detachment needs the help and support of existing Detachments. The important issue is bringing Marines, new members to the League.

The Commandant should also be aware of the activities and programs of other Detachments within the Department. If a Detachment is having problems, or has questions, the Commandant leads the way for his/her Detachment to lend a hand and help.       Similarly, we should work in an environment where teamwork is a working concept, and feel free to call on other Detachments for ideas, assistance and support, or general communication.

The Commandant is the lead in promoting the League, whether it is for his/her own Detachment, for other existing Detachments, or in suggesting and assisting in the development of a new Detachment.       The name of the game is to bring new members to the organization, and expand the League’s support of all Marines.

OTHER – Other duties of the Commandant include:

The Detachment Commandant’s position is critical to the success of the Detachment, and to the Marine Corps League.       The ability to lead will be decisive to the success of the Detachment. The ability to delegate and monitor results will be crucial to time management — getting things done through others and achieving desired results.       To effectively promote the Detachment and League will develop positive image and attract members. Looking out for the best interests of Marines (of all era’s, ranks, and units), in and out of the League, is a thread, which makes this organization unique among veterans and Marine organizations.