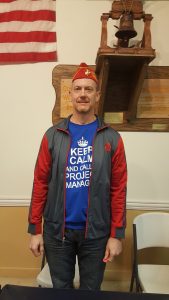 The Judge Advocate (JA) provides legal counsel and opinions on by-laws, policies, corporate regulations, and parliamentary procedure for the Detachment. His/her chief role is to assure the legal and operating integrity of the Detachment within the framework of National, Department, and Detachment by-laws and policies, and any other legal entities such as state corporation requirements, for the Detachment. The JA may also be called on to make procedural rulings during the course of business and officer meetings.

While the JA should be familiar with the operations, procedures, programs, and activities of the Detachment in case he/she is called on to fill in for an absent officer, his/her primary responsibility is to understand, interpret, and rule or provide opinions on the authorized and legitimate code for conduct of business.

LEGAL COUNSEL OF THE DETACHMENT – While this officer position does not require being a lawyer, some of the skills and interest are probably desired. The laws of the Marine Corps League are contained in the By-Laws, and the Administrative Policies, which are published by National and the Department. Each Detachment should also develop by-laws and policies in conformance with National and Department, to be used as the legal guidelines for carrying on business as a Detachment. The Judge Advocate (JA) should be a participant in the writing of these documents if they are not already in place.

It is important for the JA to have a thorough understanding and working knowledge
of all by-laws and policies. On his/her own initiative, questionable issues should be brought to the attention of the Board of Trustees and/or general membership for review and opinion. Questions regarding issues or policies brought by the membership or officers need to be resolved by the JA in an objective and expedient manner where practical. The JA may also call on the Department and National Judge Advocates for advice, counsel, and interpretation.

A primary purpose of the JA is to keep the Detachment on solid legal footing, and to assure that Marine Corps League and state laws are complied with by the Detachment.

In cases where a member(s) is embroiled in an issue, the JA should render opinions as quickly as possible, and as objectively as possible, to avoid disruption to the Detachment. If the issue cannot be solved without going beyond the Detachment, the Administrative Procedures by National and Department will be in effect.         Generally, 99.5% of the problems can be addressed at Detachment level, if immediate action is taken, and that action references by-laws and policies.

ADVISE ON BY-LAWS AND POLICIES OF THE MARINE CORPS LEAGUE – The governing laws for all organizations within the Marine Corps League is the National by-laws, policies, and administrative procedures. The Judge Advocate (JA) should be thoroughly familiar with these documents, and those of the Department, to advise the Detachment on any questionable issues and/or problems. Assistance may be gained from the Department and National Judge Advocates if necessary.

Generally, questions in this area arise when developing and/or modifying Detachment by-laws, policies, and administrative procedures.         In addition, there can be questions regarding attendance at Department and National meetings, processes for submitting changes to by-laws and policies, awards, discussion topics for agenda, and other.

ASSURE THAT DETACHMENT ABIDES BY THE BY-LAWS OF THE DETACHMENT, DEPARTMENT AND NATIONAL – The Judge Advocate (JA) is the “watchdog” and “policeman” for assuring that strict adherence to all three levels of by-laws and policies are followed. The purpose is to assure conformity to the letter and spirit of accepted laws and policies of the Marine Corps League in general, and to insure that conditions of charter and incorporation are maintained. The JA should review motions and votes, eligibility of voters, and activities on a regular basis to assure compliance.         Any discrepancies need to be addressed immediately with the Board of Trustees, and/or the membership. Documentation of issues and instances should be made for the record, for review in the future in any similar instances.

AUDIT OF PROCEDURES. SIGNATURES, AND FINANCES – The Detachment Commandant may direct the Judge Advocate (JA) to perform periodic reviews of procedures and finances to assure compliance with Detachment policies and procedures. Included in this process is reviewing how work and transactions are processed in conformity to Detachment written policy and procedure. The JA should check bank accounts and checks to assure that dual signatures and procedures for expenditure of funds are being followed according to Detachment procedures. The JA may also be assigned to review the audit trail of funds received, the application of funds in accordance with procedures and accounting practice, and assure the integrity of monies received and disbursed by the Detachment.  Such procedures may include checking receipts for expense checks, and determining the legitimacy of expenditures within budget policy. The JA should make a written report to the Board of Trustees at least once per year (preferably twice a year), if directed to engage in the audit process.

RENDERS OPINIONS AND RULINGS DURING MEETINGS ON PROCEDURES The Judge Advocate (JA) should be well versed in issues of parliamentary procedure, ritual, and business order during meetings.         The Commandant or presiding officer may refer questions of procedure to the JA. Normally these questions are relevant to motions, amendments, order of business, and other meeting procedures. Questioning of a procedure from the floor must be channeled through the presiding officer to the JA. The JA should also advise the Commandant or presiding officer on the meeting Ritual, and procedures decided by the Detachment.

As with any effective organization, the Marine Corps League has established by-laws, policies, and procedures at the National level to safeguard its charter, and to provide a framework for co-existence among many and varied subordinate organizations (Departments and Detachments).         Detachments are expected to incorporate and establish their own written by-laws, policies, and procedures within that framework.

The Judge Advocate is the keeper, protector, and counselor of those laws, policies, and procedures within the Detachment.         He/she must be diligent in assuring conformance to these credentials that allow the League and the Detachment to exist in an orderly manner. As with laws in our daily lives, we may not agree with them all, but they exist for the purpose of providing a common structure within which we can operate, and mutually respect the rights of others. The Judge Advocate has the right and obligation to suggest meaningful change to the statutes from higher levels, and a procedure for being heard.

The Judge Advocate enforces through the Board of Trustees, and advises members and officers of the Detachment, with the objective of maintaining order within the Marine Corps League organization.