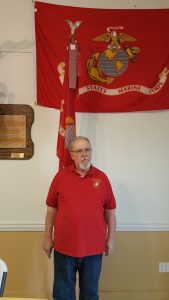 The Senior Vice Commandant is second in command of the Detachment.         This officer should be a logical successor to the Commandant, and is therefore required to be fully familiar with the Commandant functions through his/her term of office. Many of the duties described below are the same or similar to those of the Commandant.

ASSISTANCE AND SUPPORT TO THE COMMANDANT –  In many respects, depending on the size and number of activities of the Detachment, the relationship between the Commandant and Senior Vice Commandant is team effort.         It is helpful when these two officer positions have complementary skills that can be shared in achieving the Detachment’s goals, and in administering the affairs of the unit.

One objective of the Senior Vice Commandant’s (SVC) position is one of preparation for the office of Commandant.         In achieving that objective, it is important for the SVC to be integrally involved in all the affairs of the Detachment, and to take on specific tasks assigned by the Commandant.

Of prime importance is assisting the Commandant in the completion of tasks that are important to the Detachment.         This may include taking on jobs as directed, providing specific skills not inherent with the Commandant, and/or assisting in the two-way communications between members and officers.

CHAIRS COMMITTEES AS REQUESTED BY THE COMMANDANT – Committees and projects chaired by the Senior Vice Commandant (SVC) should be significant and important to overall Detachment operations.  As an example, some Detachments assign the financial responsibilities of budget, revenue generation, expense control, and financial stability to the SVC as a finance, or ways and means committee. The SVC works in conjunction with the Paymaster and other officers/members in developing, monitoring, and identifying revenue sources (which may include fund raising events and solicitation for donations).

Chairing a finance committee assumes responsibility for evaluating, developing and monitoring revenue sources, and determining the expenditure needs of the Detachment; developing and maintaining an annual budget (which is a guideline and formulation of operations and programs in dollar terms) for revenues and expenses; spearheading donation sources for Detachment programs and activities; and evaluating and reporting on financial standing (with Paymaster), and actions required on a periodic basis (at least quarterly).

The SVC might also be directly or indirectly involved with public relations and press/media releases that advertise and promote the Detachment and its programs, and establishing contacts for the affairs of the Detachment. In addition, the SVC can communicate with members on ideas and suggestions, and identify potential issues that need to be brought to the attention of the Detachment officers.

Another potential responsibility for the SVC is to be responsible for evaluating the effectiveness of Detachment operations, and determining improved methods and ideas for enhancing the overall capabilities of the Detachment. In effect, the SVC may be accountable for developing ideas and programs, which will assure the continued relevance of the Detachment and the Marine Corps League to current members and potential members. This is an opportunity to review and suggest strategic plans that involve organization structure, programs and activities, and ideas that further promote the significance and effectiveness of the Detachment.         This might include surveys of members and potential members, and discussion groups to air problems and identify new goals.

While the SVC might take on specific projects for specific purposes, the primary focus for his/her leadership should be on general requirements and needs that have a broad impact on the entire Detachment.

The selection to specific committees and projects should be based on capabilities and/or learning requirements.         The same leadership functions are required as those of the Commandant.

PRESIDES IN ABSENCE OF COMMANDANT  –  Being second in command, the Senior Vice Commandant (SVC) will be called upon to perform on behalf of the Commandant when the Commandant is unable to preside at meetings, or attend events.         For this reason, it is important that the SVC be current on issues, procedures, objectives, and requirements normally handled by the Commandant.  The SVC should be able to step into the Commandant’s role with minimum difficulty or disruption.

Some of the roles the SVC may be called upon to perform include presiding at detachment general meetings, officer meetings, and committee/project meetings. The SVC should be familiar with the requirements of the Commandant in these areas, and be able to effectively use Robert’s Rules of Order, other parliamentary procedure, and the Marine Corps League Ritual.  In addition, the SVC may be called on to deliver presentations or meet with other contacts that are handled by the Commandant. The SVC must be prepared to meet contingencies that arise by the absence of the Commandant.

OTHER – Other duties of the Senior Vice Commandant may include:

The SVC should be a major contributing force to the success of the Detachment. He/she should provide knowledge and influence in assuring the achievement of Detachment goals and operational objectives.